The La Junta Chapter has undertaken several important projects during its chapter history:

In spring 1930, the La Junta Chapter had a concrete gateway built on Highway 50 at the entrance to the grounds. Soon after, Highway 50 was moved to the south side of the Arkansas River by the highway commission, leaving the Bent’s Old Fort site away from the main highway through Colorado. There was one grave near the site marked by a sandstone marker. The La Junta Chapter had the stone reinforced and the lettering, which was almost obliterated, deepened. The chapter placed a concrete replica of Bent’s Old Fort in the La Junta City Museum, which is of great interest to tourists.

Realizing the opportunity to expand the preservation of the site, the La Junta Chapter sold the land to the State of Colorado for $1 on June 14, 1954, for the use and benefit of the Colorado Historical Society. The state later deeded the land to the United States Government for $1 on June 3, 1960. On that day, President Eisenhower signed the bill authorizing the establishment of a National Historic Site at Bent’s Old Fort. The National Park Service has been its custodian since and reconstructed the fort on the site.

On Saturday, June 5, 2010, on the 50th Anniversary that Bent’s Old Fort became part of the National Park Service, chapter members participated in a re-enactment of the dedication of the original DAR marker. 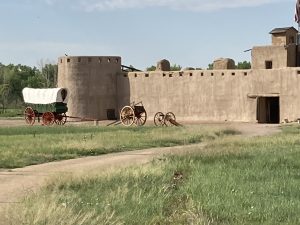 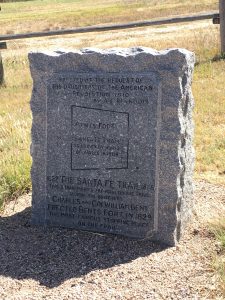 William Bent, the founder of Bent’s Old Fort, passed away May 19, 1869, and was buried in the family cemetery on the farm of his daughter, Mary Moore. In 1906, William Bent’s body was moved to the Bent Family Cemetery in Las Animas, Colorado.

The exact location of the original gravesite was lost, but Phil Petersen, a La Junta surveyor, located the little farm cemetery on a map. In 1988, Chapter Regent Helen Hunter began a project to mark the original gravesite as part of her chapter regent’s project. Chapter member Cleva Bourne and her son cleared the ground and put up two flag poles. Las Animas council member Gerald Faust poured the concrete; the stone marker was paid for by the La Junta Chapter using funds bequeathed by chapter member Maria Inge Dicks. On May 16, 1992, the chapter dedicated a stone marker for William Bent at his original burial site on his daughter’s farm, which is located ~1 mi east of US 50 on 6th St (Co Rd FF75) on the south side of the road. A time capsule was placed under the monument containing information about the marker, the La Junta Chapter, and current events. 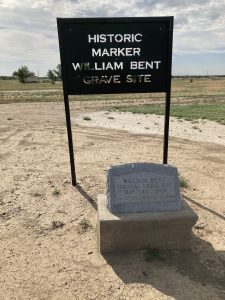 During the 1970s, one of the large murals on the wall of the La Junta Koshare Kiva was donated by La Junta Chapter members.

In June 1980, the chapter undertook a special historical project of reprinting a book of 140 pictures of scenes of La Junta dating from 1875 to 1904. A copy of the book had been given to the chapter 15 years before by Roy E. Rockwell and was one of about a dozen known to exist.